Contact electrification (triboelectrification) effect, the most fundamental effect for electricity, has been known for over 2600 years since ancient Greek time, but its scientific mechanism remains unclear. The study of triboelectrification is recently revived due to the invention of the triboelectric nanogenerators (TENGs) by using the coupling of triboelectrification and electrostatic induction effects, which is the most effective approach for converting mechanical energy into electricity for powering small sensors. TENG is playing a vitally important role in the distributed energy and self-powered systems, with applications in internet of things, environmental/infrastructural monitoring, medical science, environmental science and security. In this talk, we first present the physics mechanism of triboelectrification for general materials. Secondly, the fundamental theory of the TENGs is explored based on a group of reformulated Maxwell equations. In the Maxwell’s displacement current proposed in 1861, the term e¶E/¶t gives the birth of electromagnetic wave, which is the foundation of wireless communication, radar and later the information technology. Our study indicates that, owing to the presence of surface polarization charges present on the surfaces of the dielectric media in TENG, an additional term ¶Ps/¶t that is due to non-electric field induced polarization should be added in the Maxwell’s displacement current, which is the output electric current of the TENG. Therefore, our TENGs are the applications of Maxwell’s displacement current in energy and sensors. TENGs have three major application fields: micro/nano-power source, self-powered sensors and blue energy. We will present the applications of the TENGs for harvesting all kind mechanical energy that is available but wasted in our daily life, such as human motion, walking, vibration, mechanical triggering, rotating tire, wind, flowing water and more. Then, we will illustrate the networks based on triboelectric TENGs for harvesting ocean water wave energy, for exploring its possibility as a sustainable large-scale blue energy. Lastly, we will show that TENGs as self-powered sensors for actively detecting the static and dynamic processes arising from mechanical agitation using the voltage and current output signals. 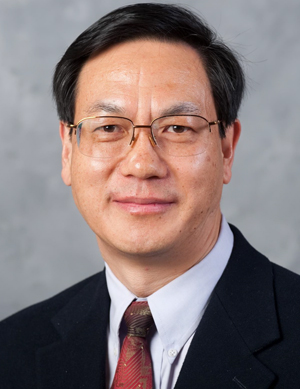 Dr. Zhong Lin Wang is the Hightower Chair in Materials Science and Engineering and Regents' Professor at Georgia Tech，and Founding Director and Chief Scientist at Beijing Institute of Nanoenergy and Nanosystems. Dr. Wang pioneered the nanogenerators from fundamental sciene to technological applications. His research on self-powered nanosystems has inspired the worldwide effort in academia and industry for studying energy for micro-nano-systems. He coined and pioneered the fields of piezotronics and piezo-phototronics for the third generation semiconductors. Wang is ranked No. 1 in Google Scholar public profiles in Nanotechnology & Nanoscience both in total citations and h-index impacts. He is ranked #15 among 100,000 scientists across all fields worldwide. His google scholar citation is over 220,000 with an h-index of over 230.

Dr. Wang has received the Albert Einstein World Award of Science (2019); Diels-Planck lecture award (2019); ENI award in Energy Frontiers (2018); Global Nanoenergy Prize, The NANOSMAT Society, UK (2017);  Distinguished Scientist Award from (US) Southeastern Universities Research Association (2016); Thomas Router Citation Laureate in Physics (2015); The James C. McGroddy Prize in New Materials from American Physical Society (2014); MRS Medal from Materials Research Soci. (2011). Dr. Wang was elected as a foreign member of the Chinese Academy of Sciences in 2009, member of European Academy of Sciences in 2002, academician of Academia of Sinica 2018, International fellow of Canadian Academy of Engineering 2019; fellow of American Physical Society in 2005, fellow of AAAS in 2006, fellow of Materials Research Society in 2008, fellow of Microscopy Society of America in 2010. Dr. Wang is the founding editor and chief editor of an international journal Nano Energy, which now has an impact factor of 15.5. Details can be found at: http://www.nanoscience.gatech.edu

The Art of Border Crossings: Integrative Multidisciplinarity in the Natural Sciences and the All Atom Model of a Native HIV Capsid

Those of us engaged in active experimental research careers rarely have the opportunity to step back from the lab bench or the computer to reflect on how scientific practice has changed, what kinds of interactions have proved effective, and how to begin to articulate the features of successful research. In the field of Structural Biology, which is in practice deeply inter- and multi-disciplinary, research at the interfaces of traditional disciplines, such as Biology, Chemistry, and Physics is essential for addressing the most important problems. If future progress in the natural sciences depends on escaping from the restraints of narrowly disciplinary language and frameworks, as I believe it is, then we will need new approaches and language to negotiate these boundaries and teach the ‘art of border crossing’ to young scientists. In my talk I will present an example of research carried out by a team of scientists that hail from different fields. Using solution NMR, MAS solid state NMR, crystallography, cryoEM and large-scale MD simulation permitted the construction of all-atom models for the hexamer-of-hexamer and pentamer-of-hexamer elements that make up the HIV-1 capsid core, which, in combination with cryo-ET allowed us to derive a realistic all-atom model for the entire capsid. 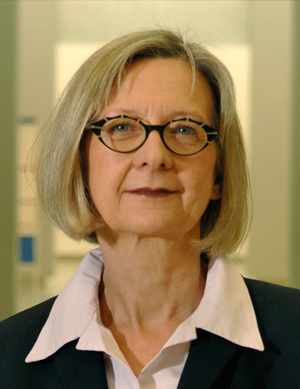 Dr. Angela Gronenborn heads the Department of Structural Biology at the University of Pittsburgh School of Medicine and holds the UPMC Rosalind Franklin Chair.

Throughout her career, Dr. Gronenborn was involved in developing NMR methodology for structure determination of biological macromolecules. In the area of HIV research, Dr. Gronenborn directs the Pittsburgh Center for HIV Protein Interactions (PCHPI). In recent years, Dr. Gronenborn has focused on extending the application of NMR to the study of complex systems, in particular developing fluorine NMR approaches.